100625 Little things happen all the time

getting down to the departure time next week.  wah.  but life still going on here.  i've added a few pics to the picasa galleries
for Misc Life and Thai Bugs.  go there and scroll down to the new photos.

A lizard appeared on the tamarind tree behind my shower.  he was nice enough to hang out there until i could finish my shower and run for my camera.  beautiful color on his head. 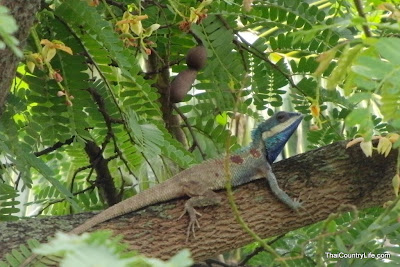 i showed him to tok and she was like "meh"  she said they are common in thailand, they see them all the time.  i explained to her that we don't have these commonly in the states- depending on where you live. and not in seattle.  i guess it would be like somebody coming to seattle and taking pictures of pigeons all the time.  we'd be like "they're just pigeons, what's the big deal?" my earliest memories were from the time we lived in victorville california.  out in the desert at george air force base.  lizards were part of a boys life then and there.  specially "horny toads".  i liked lizrds then, like 'em now.  she asked me what animals are common in seattle.  i had to think about that one.  birds of course, dogs cats, sometimes raccoons, dead 'possums, squirrls, rarely a snake.  that's about it. had to google up photos of most the raccoons and possums for her, she'd never seen one.

the kids came by with a crazy bike they put together.  check this thing out: 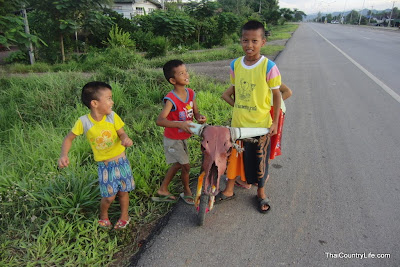 cow skull handlebars... now THATS COOL! (there's another picture in the picasa gallery) little scooter wheel in front, regular wheel in back, and lots and lots of rope.

we've had a "bad cat" coming around harassing our cats for a while.  poor August comes in all scratched up, missing patches of hair.  one day mama caught the "bad cat".  there was a bunch of hollering (in thai of course) teri came out with the basket and a lid, the put the cat inside, tied down the lid jumped on the motorbike and drove away.  i was concerned they were going to throw it in the river - i don't know what they do in such situations.  15 minutes later, tok and teri came back, minus the cat.  they didn't drown it.  just took it to the next village and let it out.  let them deal with the monster.  banishment i can handle.  it was likely a feral cat, not somebodies pet.  here's August: 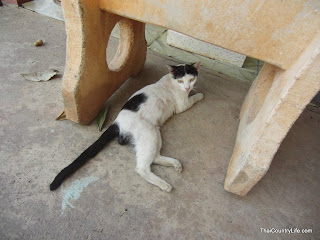 we fixed a few things around the house today - i put up a shelf, re-strung the ropes on the rain shades, took off the cement board over the steps.  trying to get all the little things done while i'm still here.  i've been following Cliff Maas's weather blog since i've been home.  i see the folks in seattle have had worse than usual crappy weather.  but it just might be real summer when i get back.  that will be nice.  easier to adjust to.  but 75 degrees F will seem cold, as usual.

i made a panorama view of the mountains to the west of our house.  it is nice, isn't it? (click here to goto the view page)