here's a photo of the sky above my shower, taken a few nights ago: 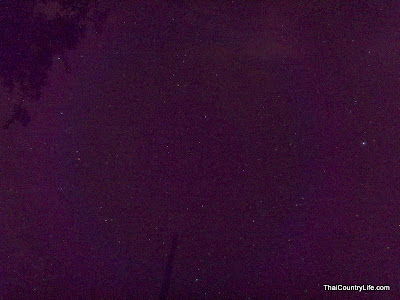 not much to see except stars, a bit of the tamarind tree, the the trunk of the betal nut palm that's had its head removed.  and that is EXACTLY the point!  the row of glaring, orange sodium high pressure lamps on the big road in front of our house have been silent for a week now.  it's wonderful!  it's dark... wow, there was just now a powerful swirl of wind around the house.  the bedroom shook on it's pilings, and the trees and bushes are whipped around.  a big bubble of hot hair just broke loose from the ground and rose up into the sky.  that means a thermal is going up right over our house, and a cloud will form when it gets high enough to cooler air.  and now it's calm again. anyway, as i was saying; it's dark around the house at night this past week.  when i go out to take a shower before bed i'm surrounded by dark shapes of the trees and houses.  lightning bugs fly thru the air.  a quiet, steady light, the color of white LED's wandering thru the dark.  how do they see where they're going?  there was lightning in the sky the other night.  awesome.  quick flashes of brilliant light illuminating everything like a ginormous camera flash.  it started to rain, and i stood there in the stream of water from my pump shower, deeply enjoying the experience.

there is usually a haze in the air in our valley.  moisture and dust in the atmosphere soften the bright sunlight, and blurs the ridges of the mountains and the edge of the horizon.  today it is very clear.  the kao koa peaks to the north west stand out sharply, the green of the trees on the slops is bright and variegated.  the sunlight is sharp on your shoulders.  not too hot today.  very pleasant. 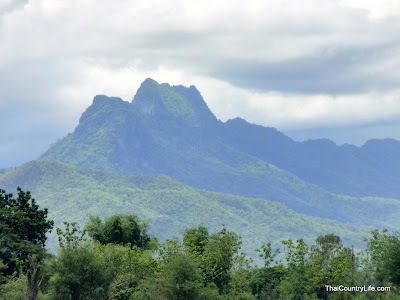 we had planned to go to the Phe Tha Kon ghost festival in Dansai next week.  except the websites that had next week as the dates were wrong.  tok saw on television that the festival is *this* weekend.  we're un-prepared to go now.  tok has to go to work early monday morning, and the bus doesn't get back early enough.  if we went tomorrow, because of the bus schedule, we would only be able to be in Dansai for a few hours, so we might cancel that plan.  our budget for extras like that is pretty slim this late in my time here.  there have been packs of motorbikes and motorcycles going by on the big road all day and night since yesterday.  they are going to Dansai.  i'd like to go just to see all the cool motorcycles and motorbikes.  maybe we will.

we bought recessed lights for the bedroom, so i have another wiring/install job to do this week.

i received some information late last night that made me really sad.  a friend of mine, a guy i've known for 25 years, decided to start drinking again.  he'd been clean and sober the whole time i've known him.  he said it's fun now.  but that won't last.  and his taking the next step - to serious drugs- is one more bad decision away.  i don't drink or get high because it was revealed to me that i'm one of those people who went over the line.  over the line past "recreational use"  i was offered a path out of that darkness, i took it, and i'm still on that path.  my world is much better illuminated since then.  i've lost many friends and many acquaintances over the years. that's their choice. just makes me a bit sad to hear about this one, as he and i have a long history together, and i have strong feelings for him to go with that.  oh well.

mama is spending the day under the house cleaning the shells off tamarind fruits.  man, she gets things done.  she 'hangs out' a lot more than she used to, as her health is a bit weaker, but she just keeps at it.  she sat in the yard for four days, on a little wooden stool, poking at the weeks with a digging tool.  covered the whole yard. 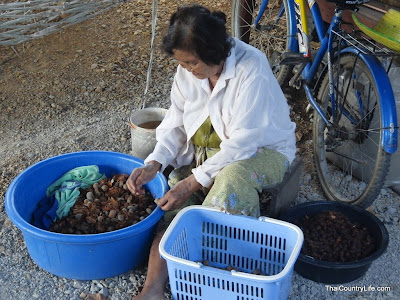