friends,
it's been party time the last couple days.  monday night we went to a party, given by a family of a young man who is going to become a monk.  most thai males enter the monkhood at some time in their lives.  even if it's only for a few weeks.  it's a very big deal for a family, a 'rite of passage" of sorts, and they often throw a party to celebrate the event.  some parties are small-  a few neighbours, some food and drinks, a stereo playing.  on up to big bash's, with tens of people, mass food and drink and hired entertainment- usually "Coyote Dancers" and singers and a giant set of speakers.  they typically rent plastic chairs, folding tables and put up awnings in case it rains.  they serve a lot of food, and every table has a bottle of whisky, bottle of coka cola, water, ice and glasses.  after the eating and drinking, some people of course get a little loosened up, and they start dancing.  it's great fun, the food is usually good.  people are very friendly to me, especially after some of the alchohol starts to work in.  they smile at me, talk to me, or try to, as i never understand, so they turn to tok and she answers for me.  if they know a little english, they will try it out on me.  i get offered drinks alot.  which is awkward, because they just want to be friendly and have me join in. i usually pat my stomach, then throw my hand quickly away from my mouth.  they seem to get that pretty well - if i drink it goes to my stomach and i'll throw up.  in the past, i've poured a little coca cola in my glass of water, giving the water a slight brown color- which passes for whisky/water, they see i have a drink and are good with it.  but then people tell tok that they were sure they saw me drinking, and my little deception isn't worth it so i usually don't resort to that trick.
the party night before last was very nice.  some of the singing was good, some wasn't.  there were a whole table of people there who are toks friends.  i usually sit and eat, sit and drink soda water on ice, sit and look at eveybody.  i always get invited to the dance floor.  never really a floor actually, since these are always outside parties and the 'floor' is usually dirt.  so i smile, and dance and sit, eat, smile some more.
last night we took the motor bike to Lom Kao, about 28 km away to Henke's gas station, where he was having his birthday party.  he bought a motorcycle this year, so most of the people there were bikers, with a row of big motorcycles parked along the hedges.  more food, drinks, talking, smiling.  one of the guys there was a thai/american from florida.  living here now on disability after a truck accident in the states.  we met Henke and his wife at the waterfall last  year.  great guy, good energy and very welcoming.  tok had to be at school for work very early this morning so we didn't stay very long.
today was "teacher appreciation" day at the school. tok was there almost all day. and she said there was a party at the school also.  three days, three parties.  she went to bed at 8pm tonight.  i'm still  up, as usual, working on the website and surfing the web for details.  i finally finished the wiring for the new bedroom ceiling light.
party photos in picassa
onward!
Nu 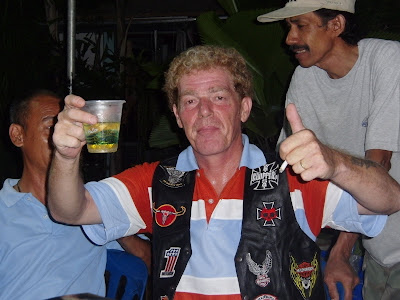