friends,
the Loi Krathong festival this year was on Toks birthday: the 21st.  She sent me some photos.  they went to the temple in the village, and floated their Krathong on the pond next to the temple.  This is one holiday that we have never shared together.  I was in thailand years ago, and enjoyed the event when i was in phuket.  that time, they floated the krathongs on the ocean, and on a large inland lake.  the hot air balloons they release float high in the sky.  very beautiful to see a hundred flickering lights in the sky and on the water.  they don't seem to worry about them coming down and starting fires - which is the first thing people say in america when i tell them about it. 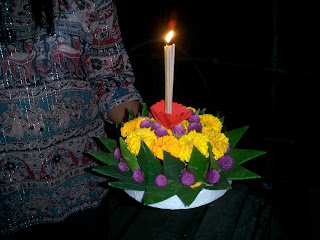 they are floating them on a small pond - they can collect the styrofoam floats.
traditional ones are made from bread (which disintegrates) or banana leaves. 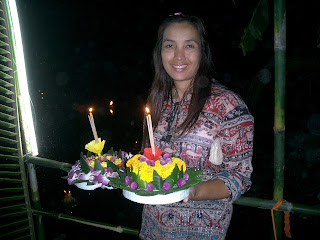 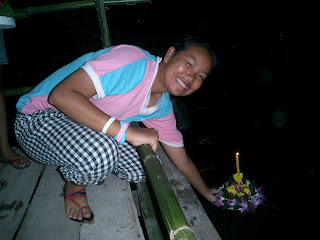 Teri launching Krathong on the pond 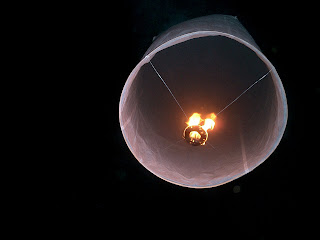 Hot air balloon lantern - up and away!
Onward!

"Anxiety is the dizziness of freedom."    Soren Kierkegaard