Dan and i a making our way up the outside of the Baja Peninsula.  we've stopped in a few small bays, with only a small fishing village onshore.

yesterday we pulled into Bahia Torgugas, which was the first stop on the way down on the Baja Ha-Ha.  when i was here last, the bay was filled with a hundred and twenty boats.  this time, there are only a few other boats at anchor.  we went ashore, and had a great meal in a family restaruant.  but, it was sunday, so all the tienda (stores) were closed.  we had internet in the cafe.  looking at the weather, it appeared that this coming wednesday was going to be blowing 20-30 knots up north.  dan decided we should book out of here in the early nighttime and make a 60 hour run for Ensenada.  we got a little sleep, got up at 9pm and made ready to depart.

Dan lays out our routes on his laptop, then transfers them to his two Garmin GPS navigation units, so we had a course laid out to navigate our way out of the bay. 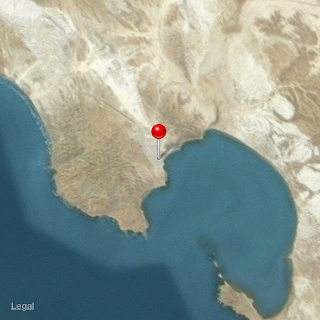 i cranked in the hundred feet of anchor chain with the electric windlass, shouted to dan "anchor up!" and came back to the cockpit.  he said that the GPS went blank when i was winding in the chain - the electrical drain from the windlass must have dropped the voltage enough to blurp the GPS, so he had to reboot it.  the screen was up, and indicating our planned course out of the bay, so Dan turned the boat onto the course and proceeded to follow it.  it was very dark.  the moon wouldn't be up for hours yet.  we identified the two light houses marking the reefs at the entrance of the bay.  but it was a bit confusing, as there were lights onshore from cars, houses, and another powerboat anchored nearby. 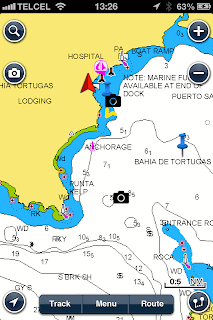 we were anchored near the camera icon, just to the right of the red triangle

with the boat underway, and my tasks complete for the moment i went below to fire up my Navionics navigation on my iPhone.  the program started, i clicked the disclaimer button, and pressed the "Track" button to turn on tracking our path.  a couple more clicks to center the map and zoom into our location, i saw that we were right in a shoal area, with numerous red-stars that mean ROCKS right where were were traveling.  i just thought "woha, i better show this to dan" and BANG! there was a very loud crash and i was instantly thrown to the floor of the cabin.  Dan yells "WHAT THE FUCK WAS THAT!" and my brain answered "a rock, or a hard place."  i picked my self up of the deck, ran up to the cockpit.  we'd hit a rock going about three knots.  the engine was running, Dan took it out of gear.  in the shine of my headlamp i could see an orange float and line feet off the stern of the boat and warned Dan.  he put it in gear and powered forward to avoid getting tangled up in the line.  we still had propulsion.  which is good.  it was a bit confusing, dark, lights, wind.  i told dan we were right in a shoal area, we should head "that away" to get out of the rocks.  Dan gave me the helm and ran downstairs, threw off the deck covers and checked the bilge for incoming water.  there was none.  dry, and no visible seepage.  okay, we're not sinking.  that's good.

we carefully motored a hundred yards away from our position, and dropped the anchor again.  Whew.  that was exciting.  Dan was very perplexed that we were so far off from where our routeing said we should be.  when dan said again that the GPS had turned off and had to be rebooted, i realized that what likely happened.  GPS units will give you a positioin as soon as it locks into a couple of satellites, but the accuracy is quite approximate.  it takes some minutes for the GPS to acquire more satellites and refine the accuracy of your true position.  so we were in a track, that was apparently many feet in error, which put us into the rocks. 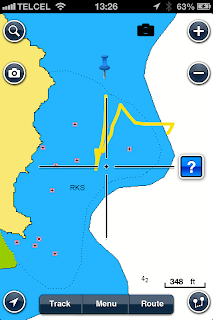 you can see our track in this screen shot.  we started from the anchor point where the pushpin is.  the yellow track that starts just below it, is how far we traveled while i was getting zoomed into our position and centering the screen.  the pointy tip at the bottom of the track is where we slammed into the rock, and backed out, then veered off and re-anchored.

Dan and i spent some time reviewing the event.  there was a lot of cursing and consternation's.  eventually Dan went to bed.  i was like WIDE awake.  so i watched a couple of episodes of  the TV show "Threshold" i had save on my netbook.  read my Nook for a while and finally got sleepy around three am.

you know what they say about "long periods of boredom punctuated by moments of terror"?  yeah, that's a good way to describe it.  This morning Dan got out his hooka air compressor, wet suit, mask and fins and dove beside the boat to check.  he discovered a couple of big dings in the nose of the fin keel about half way up, but no cracks.  the bilge is still dry.  so we're good. took the dingy into the village for breakfast and some provisions.  we met some other cruizers in the cafe, also heading back to San Diego.  i got a card from one of them, who will pass me on to a delivery captain in San Diego who is always busy and uses crew.  so i'm getting some lines in the water in San Diego.  nibble nibble  woo hoo!

the adventure continues!  onward!
--
อนุกูล
Posted by thaikarl at 13:20 1 comment: