it's new years day here in thailand - new years eve still for yall.  we're always in the future.  Tok and i have had some marvelous adventures and a lot of ordinary daily life here in the land of perpetual summer.  obviously i've spent more time doing things than typing them out.

we went out for dinner at a nice karaoke restaurant last night.  Mama is still sick in hospital with some bug, so Tok, Teri, and Toks good friend Malee and i had an excellent dinner.  There was no place with a newyears "countdown" so Tok took Teri and me back home, and she went back to stay at the hospital with MaMa.  The neighbors were setting off fireworks and had their stereo cranked up to 10 playing karaoke songs.  This went on ALL night.  they didn't' shut down until 9:00am this morning.  so aside from lonely sleep because Tok wasn't there, i had boom boom boom BANG! dreams.  I woke up to the usual rooster choir, stereo still blasting Midi music and people singing sorta close to the song, and the zooming traffic on the big road, sun blazing thru the east window.  and there is no place else i'd rather be. 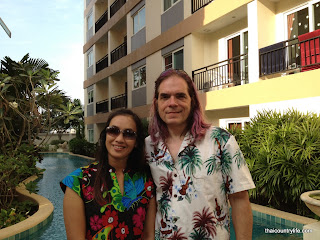 Posted by thaikarl at 20:34 No comments:

i've received a few emails asking "whats happening over there? where are the postings"  i have to admit, posting about life here, reminds me of life there, and i'd rather just be here.  but, my postings are as much for me as for yall, as it keeps a record of my experiences  and travels.  so here's the ketchup, and i'll post some of the details accounts on the website and send links to them.

my 23 hour layover in korea was wonderful.  i like korea.  even though i've only seen a small part of Seoul, the vibe there is very pleasant.  but it was cold!  i spent the night in the jjimjillbang, which was amazing.  if you fly korean air to asia, look for the schedule that gives you that 23 hour layover.  you can exit the airport, bus or train into the city, and have a free day in korea.

arrived in bangkok late in the evening and couldn't find Tok,  my mobile phone didn't work, so i had to figure out the pay-phones.  finally discovered you have to dial a leading "0" to get through.  she was waiting way down at the other end of the terminal.  i'd delayed my departure a week to let the flood waters go down some, and she had a room at our favorite hotel all booked and ready to go.  the sky-train  boards right at the airport - unlike the light rail in seattle, which boards a thousand yards away, terrorists you know, can't have them taking the train right to the airport- we have to make them walk in like the rest of us. the sky train takes us to victory monument station, where it's a short walk to Hotel 99.

we spend a couple of days in bangkok.  picking up things we can't get up north.  bangkok shopping is an assault on the senses.  there is so much stuff, so many little shops and kiosks.  strange thing is, if you are just walking around looking at everything you will find all sorts of things you didn't know you needed.  but if you go looking for a specific thing - like a 14V DC power adapter, you'll go crazy cause nobody has one.  there were piles of sandbags everywhere, and many of the shops had sudden cinder block dams built around the entrances.  Tok told me that at the height of things, people were charging as high as 400 baht (12.97$) per sandbag.  normal price about 50 cents.  there's probably whole beaches with no sand on them anymore.   my favorite guitar shop had nothing on the racks.  the owner moved everything upstairs in case the water came as far as his shop, luckily it didn't. 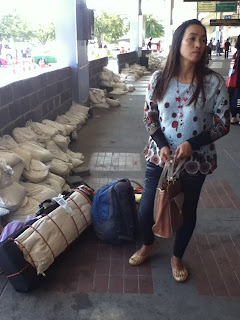 we took the bus from Mochit station home to Lom Sak. along the way, just outside of bangkok, we could see there were large areas still underwater.  acres and acres of factories and homes flooded.  fortunately, most of the major roads in thailand are built on raised berms, so traffic still moves, but there were a couple of times the bus had to cross sections a foot deep in water.

from the time we got home, we've been going going going, like little energizer bunnies.  went to the tamarind factory, went to a singing contest that Toks daughter danced in, visiting people, getting supplies, shopping for food and things i need, getting the car fixed, getting supplies for the construction workers.  hardly any time sitting on the porch reading my book and sipping espresso.  my wife had saved up some money, put it down on a toyota pickup truck, and contracted to have the dirt area under our bedroom house paved with concrete.  the people who sold her the truck changed their minds and wanted the rest of the money at once, so they could buy another car, so we ran around trying to find another truck - Tok finally made arrangements with another family in the village to pay off the first people and carry the loan for her.  on and on and on.  only quieted down in the last couple of days.

i just love it here.  it's warm and sunny everyday.  it's the dry season now, so no rain for a couple months and cool at night.

Weather for Phitsanulok, Thailand  (in the mountains 130 km away from us, a little warmer where we are.)

last night, i took a shower in my outside shower, and looked up and enjoyed the total eclipse of the moon, the bright point of jupiter, the shadow of palm trees against the night sky.  sublime. 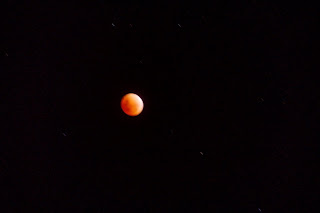 slumber party at our house last night.  my wife's daughter and her friends are in a dancing show this morning.
everybody was up *before* dawn so Tok could do their make-up. 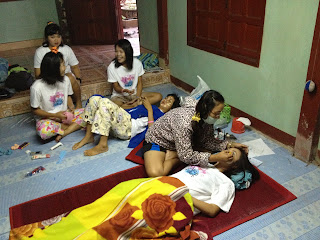 amazing thailand!
Posted by thaikarl at 16:39 No comments: