friends,
arrggh. back in the USA.  what a weird place.  downtown seoul to downtown seattle- what a difference.  took the bus downtown.  had a piece of (bad) pizza, 5.34$!  190 baht.  i was suffering the usual re-entry traumas.  reading signs i don't care about. not used to people talking to me, so i'm not paying attention to the pizza guy and don't understand what he said.  cold.  driving on right.  young kids shouting and wilding in the mall. homeless guys shouting and digging through trash cans.  got on the number 11 bus.  the driver told us all to get off, there was a handicapped guy in a wheelchair slumped over not moving.  so the aid car was coming.  took me 4 hours to get to my brothers apartment from the airport.
but i didn't have any hassle with immigration and customs this time.  i got diverted thru a second x-ray machine, and asked some survey questions - "have you been on a farm?" because i put on my card that i visited vietnam.  that was it.
now i'm all confused about days and nights, traveling east is worst for "jet lag", getting my phone turned back on and paying for my storage room so i could get to my cloths and stuff drained the last of my bank account.
but here i am, and ready to hustle, work work work- that's my ticket home again.
onward!!!!!!
karl
--
Read my Thailand adventure ::: http://www.thaicountrylife.com

Posted by thaikarl at 02:53 No comments: 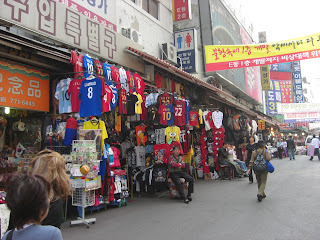 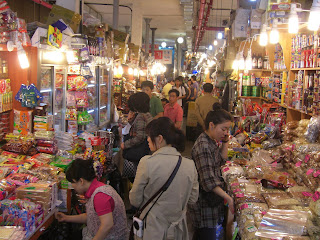 friends,
since i had so much time on my layover, i decided to go exploring.  it seems you get a visa-on-entry (being american) so i went out thru immigration - got an entrance stamp for korea and went downstairs.  the nice lady at the information desk gave me a map of Seoul, and directed me to the right bus into town.  rode in and got off at the Namdaemun market in downtown area.  pretty cool!  i wandered around all day, figured out how to get the bus back, cleared immigration- now i have both stamps in my passport!  woo hoo.

korea is quite interesting.  seems to be rather wealthy.  lottsa cars, nice well regulated roads, huge towering blocks of apartments.  everyone is dressed nice- no raggedy folk that i could see.  there was all this interesting food, but i wasn't the least bit hungry.  i ate something-on-a-stick, had a couple of espresso's and that's all i had room foor.  tons of stuff at the market, rows and alleys and streets filled with little stalls selling all the usual mega variety of trinkets, cloths, do-dads, finery's, watches, jewelery, kitchen gear.  the korean people sure look different thant he thai's and vietnamese.  paler skin, rougher features, not as many cute girls.  some interesting style choices.  plenty of businessmen in suits.  smokers everywhere.  mobile phones stuck to everyone ears.  no pick-up trucks in korea either, only cars.  the merchant trucks have pickup beds, but they look and are merchant and delivery vehicles.  most of the motorcycles have racks on the back for deliveries of goods.  the personal motorbikes were mostly big scooter style things.  nearly every car has a 6inch LCD screen sitting on the dash- GPS systems???  the land seems to be totally manicured and terra-formed.  except for the steep hills, every inch seems like it was gone over in the past, or is being gone over in the present, lots of road and building construction going on.  really nice airport.

things to seem TOO expensive, jeans and shirts for 10 to 15 dollars in the stalls, espresso was 1.20$ a shot.  and good coffee it was too.  i think tok and i are going to have to figure out a trip here.  i think she would like the food- which is a critical criteria for her.  i didn't spend hardly any money, got a little mobile phone fob with the Korean flag on it, and had my thai name engraved  on a stick as a signature stamp, like the ones they use in japan.

what a deal twelve hour layovers are eh?  i'm all check thru here at the airport, and i still have two hours to wait.  feeling really confused about what time of day it's supposed to be.  i'ts 4 in the afternoon here.  it was cool this morning, but the sun came out and it warmed up.  the whole area is covered with haze- smog maybe?  but my eyes don't burn, so maybe it's just "marine air".  yet another country where i can't read the signs and understand a single word that's being said.  at least now in thailand i can understand a few things.  i pick up a couple of words each time, but it's back to null here.

the Koreans hardly give me a second look, none of that "hey, it's a foreigner, would ya look at that" like other places.  except for my purple hair, got a few smiles and thumbs up on that.  guess i'll have to come back. Onward!!!!  Nu
--
Read my Thailand adventure ::: http://www.thaicountrylife.com

Posted by thaikarl at 23:52 No comments:

friends,
free internet for 30 minutes at the airport in inchon korea.  i have like a 12 hour layover here.  jeez.  but it's a nice airport, and i have some korean money from a previous trip.  so i'll just have to hang out.
i wonder if i can go outside?  hmmm, i'll let you know!
onward!
Nu
--
Read my Thailand adventure ::: http://www.thaicountrylife.com

Posted by thaikarl at 15:56 No comments:

090408 Thaikarl - bouncing back across the world

friends,
back in bangkok yesterday, i was considering how many times i've been here- 9 times.  i'm must be devoted to this place.  most people only get to thailand once, if ever, and for most it's a one or two week "holiday" place.  and as usual, i become obsessed with figuring out how to get back.  the lang song (medium) says two years till i'm living here.  hope so.  make it so!

new video on youtube:   http://www.youtube.com/watch?v=fRw7322EAr8thai's celebrate a death quite differently than we do in the west, at least from what i've seen.  when i get back to my macintosh computer, it will be much easier to edit and upload videos.  i have a bunch more.  hope i can bring a better camera next time.

i'll keep posting.  there are stories and events i haven't posted yet.  to my surprise, there's people all over the world who are reading these messages on the blogsite.  check out:  http://feedjit.com/stats/thaikarl.blogspot.com/map/?x=94&y=50&w=160&h=94 you have to click on the map and drag it around to expose the USA and europe to see some of the flags... those are people who have been to the blogsite.  imagine that.

Posted by thaikarl at 04:40 No comments: 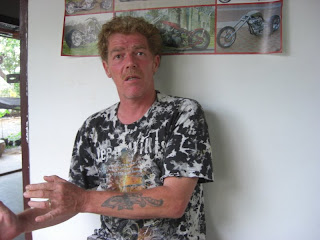 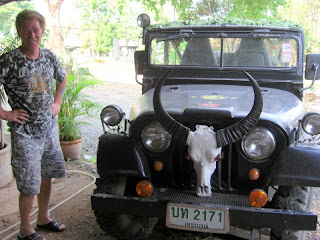 friends,
last month, when Tok and i went to the local waterfall, i met a Dutchman named Hank and his wife.  they were leaving the area as we were going in.  i talked with him a few minutes, seemed like a good guy.  His wife is thai, she talked with Tok a bit also.  Tok  said she knew the name of the village where they lived.  hank said they had a small gas station, on a corner,  in Lom Kow.

we went off to vietnam, and have been back, and i've asked tok a couple of times about going to see them.  then she told me she couldn't remember the name of the village.  well, i decided it was worth going out there, how many falangs would be running at gas station in the area?  surely someone could tell us where to go.

so we  got on the motorbike and headed north and west.  out in the countryside, passing fields of tobacco, corn, chillies and peas.  all the tobacco near our house has wilted and turned yellow from the big rain a few days ago, but a few kilometers away, the tobacco was just fine.  no big rain out there.  the day was warm, riding the bike is like having the oven door opened into your face, blasts of warm air, then a little cooling, then hot again.

we got to lom kow town, made a couple of stops to ask around, went back and forth a few times, and finally came around a corner and there was an intersection, with a two pump gas station on the corner.  we pulled up, i recognized hanks wife Sala, and she called to him, he came running out, thinking something was wrong with the pump.  it was just us.

we spent a couple of hours there, sitting around, drinking cold water.  hank lives here permanently now.  he has a cute story about meeting his wife.  she lived in holland, right next door to him.  she was divorced, and hanks wife took off for another man.  hank would babysit her young daughter, as he was left with two small children of his own when his wife took off.  before long, sala's  daughter spent more time at hanks house than at hers.  he said they were just friends and mutual babysitters for three years, but then, because of the conjoined kids, it got a little friendlier, then romantic.  hank said he used to come to thailand for a month two times a year for thirteen years.  when holland became part of the European union, and the borders effectively went down, many polish workers came to holland and the jobs dried up.  the poles would work harder for less money. (sound familiar?), so hank and his wife decided to pack it up, sold everything in  holland and moved here.

hank had a lot of knowledge about various businesses- chicken farming, pig farming,  insect farming (for eating).  either he's looked into it for himself, or knows other falangs who tried it.  he said the gas station was good business for thailand.  they were doing okay.  one of the most interesting things he told me about was a  thai friend of his who flies paragliders and paramotor!  hank says he's been up to the mountains with this guy, he'd drive the truck back down the mountain after the guys had launched and flown down to the valley.  i thought this was pretty interesting, as i still have my wing, harness and gear.  i'd thought about bring it to thailand, but the flying sites i've found online are all far away, but here's a connection right in this area.  so we'll see what happens next time.  i return to the US next week.  i need to get out to tiger mountain and get my wings on again, it's been a few years.  then maybe when i come home again.....????

Hank showed us his new jeep, and introduced us to his pet porcupine in a big cage, and a beautiful owl with one wing he rescued from the temple and cares for.

i've been told that one of the ways to keep your sanity and not feel so isolated is 1) learn the language and 2) make friends with other falangs in the area.  well, number one is ongoing, but will take me forever, but it seems i may have a start on number two.

have to finish up my jobs list in the next few days- painting under the house, putting up some rain-stopping tin, a little cement work off the porch etc.  then, the sadness of departure, and the culture shock of "the good ole USA", where i see on my yahoo weather, the temperature is near freezing and there is still snow!!!  %@$%(_Q&#(*^@*Q^%&&*@  whats up with dat???

Posted by thaikarl at 04:35 No comments:

considering the date today, i have great news!  we won the thai lotto, so i'm never have to come back to the united states.
woo hooooooo!!!!!