my step-daughter, Toey wants to learn to swim.  tok asked me if i could teach her.  my brain said "NO".  my brain usually says "NO" to everything, then i have to kick in the "conscious override" program and when it works, i can get my mouth and vocal chords to say "yes".  if it doesn't work the first time, it defaults to silence, so the program has a loop that says "IF 'reply' = silence, restart mechanical "yes" routine.  do loop until 'reply' = "yes".  sometimes even that routine fails.  in this case, i finally said "yes, i can teach Toey to swim".  nothing happened for a few weeks, then a few days ago, we were off to the market to buy swim cloths.  found one for me, but not for Toey, so i won a reprieve.  but, persistence paid off on toks part, toey had he swim suit, i had mine, we'd already been to the swimming pool one evening and got the hours and layout in place.  it was time to go.

i've never taught swimming, but i know how to swim.  so i reached way back into the memory banks and came up with some starter objectives:  blowing bubbles to get used to having your face in the water; floating on your back, kicking with your feet.  Toey was game to learn, but since i have to tell her in english, there was a bit of a communications problem.  i would demonstrate, she would try it out.  she has a habit of starting to inhale before her face is out of the water, so she sputters and coughs a lot.  but, with the encouragement of her friend sitting by the pool, see kept on, and was getting the hang of it.  her friend timed her floating, and she got up to 3 minutes and 27 seconds.  pretty good for the first day.

she had to take the motorbike to take her friend back home, while i waited at the pool.  there are some music rooms at the front. tok told me they were there, but i didn't understand what that meant when she told me.  inside a windowed room were a full set of drums, a couple of guitars and a bass, amplifiers and a microphone set-up.  while i was waiting for Toey, i was watching a guy playing guitar.  a women came over and invited me to go inside.  this was cool.  the guy inside said hello, "guitar??" and i pointed at the bass. he turned it on and we played a bit. he was really shy about playing, and deferred to my playing bass.  he said his name is Mun, he lives there at the pool.  this was pretty cool, i've been itching to play with others for a while now.  been along time since the band(s) folded and i miss playing bass.

the next day i was up in the bedroom working on the website in the late afternoon. Toey came up and said "Swimming!"  brain said "no" mouth said "yes" and we went off.  Mun was manning the desk at the pool, so we didn't go in the music room.  Toey came back with her friend again and we got in the pool for more practice.  she totally forgot how to float and we had to start over.  there was a man teaching five or so little kids in the middle of the pool, and i was taking cue's from him about instructions. suddenly there was a man yelling and pointing at the middle of the pool.  i looked around, trying to see what he was excited about. there was a shadow under the water in the middle of the pool.  the instructor man went over and hauled a young boy up from underwater and carried him to the side.  the boy was limp and lifeless.  not again.  the pool people came running, the father ran over, the kids all gathered around.  i went over to see if i could help, but the pool ladies started CPR, with chest compressions and breaths.  water spilled out of the boys mouth, which they drained to the side and kept up the CPR.  the boy still wasn't responding, but they kept it up.  the hospital is a block away.  i couldn't see, because of all the people in the way, but there was a change in the demeanor of the people around the boy, and i thought maybe some signs of life had re-appeared.  the father was sitting at the boys feet, keening in a high voice.  the other little kids were right there watching the whole thing.  the hospital guys ran in, and they carried the boy away.  in a couple of minutes, people started coming back, smiling and talking, so evidently the boy was revived.  later the pool women talked to me, and i understood when she said "sabai dee" which means "comfort good" - so apparently the boy was okay.  he wasn't breathing for a few minutes, so hopefully there wasn't any damage.  jeez.

so we went back to floating, kicking and face in the water lessons.  now i have another set of grim pictures in my brain of a small boys life-less face.  funny how those things stick so well in ones mind.

two days at the pool, two adventures in addition to swimming.  i told tok, "i wonder what will happen the next time we go swimming?" 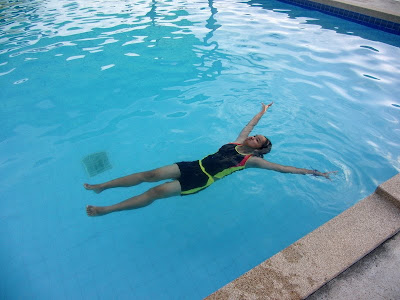