Friends,
the adventure continues!  i moved off the Emerald Lady a few days ago, and onto my new ride s/v Trilogy, owned and skippered by Dan.  Trilogy is an Islander 36, not as well appointed as the Emerald Lady, but dan's been cruizing mexico for a number of years, and he has all the right stuff, and all the support gear and systems tuned to a fine pitch.
John and Kelly took me out for a nice dinner the night before i left.  i was quite sad to be leaving them.  they have been very generous and gracious to me, and i so appreciated the time i was able to spend with them, and i hope my support was adequate.  i gained 47 days of off-shore seatime to add towards a captains license  and that in itself is valuable compensation.
we left La Paz on Trilogy at 04:00 (!!!!!) a couple of days ago.  motoring south alongside the beautiful sunrise.  i don't see many sunrises, they are as beautiful as sunsets, except rather than settling into the calm sweet dark of night, it justs builds into blazing daylight.  exactly the opposite. i guess which one i preferr.  i tried to stay awake, but i went down for a "nap" around 08:00 and didn't wake up til noon.  dan had his fishing rod out, in the late afternoon we had "fish on!"  hauled in a three food dorado.  we had a magnificent lunch from that fish! 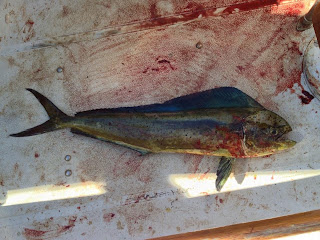 we anchored up in Bahia  De Los Muertos (Bay of the Dead) in the afternoon.  not much there, a fishing camp, and a restaruant up on the hil.  we got the dingy out and got it inflated, went into the beach and walked up tot he restarurant.  there were a couple of ladies from canada i knew from the Ha-Ha having dinner.  we had some pleasant conversation about cruizing, places to go, things to see.  Enchalada verde was tasty, but american style - way to much on the plate.  Dan is covering all expenses for me, which is very generous. the dinner was pretty expensive for mexico.  mine was 145 pesos - 13$ USD.
the next day we motor/sailed to Bahia Frailes (Bay of Friars), which has even less land features.  just a few fishing shacks.  the moon was full, the sky traces with high clouds.  light surf humming onto the long beach a few hundred yards away.  i sat up in the cockpit in a t-shirt and worked on my moontan.  hughe moths would flutter by in the night.  you can hear their wings buzzing and they clumsily wander the air.  very nice, very nice indeed. 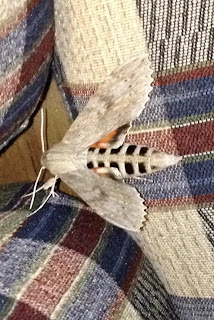 dan tied a flashlight on the rail shining down into the water.  soon attracted tens of fish, circling around the boat in the light.  we'd saved a few  scraps from the dorado and tossed little bits into the water, where the quick ones snapped them up.  we were in 30 feet of water and you could see the anchor chain on the bottom.  still amazing to me, as i'm used to the cold grey opaque waters of puget sound.
we came into Cabo San Lucas the next day.  the cruisers hate this place, with all the jet-ski's running around, pangas, "Animators" yelling games and encouragement into huge Speakers at the clubs on the beach, para-sailing  cruise ships, the general Party-On atmosphere and the high prices and huckstering everywhere.  but that's Cabo.  but i know from my bus ride exploration, that just a few miles away, people live in very basic block houses, with dirt streets and dust.  the shoreline east of the marina, past the giant hotels is lined with grossly huge and extravagant houses.  glad it's all here tho, else they'd be gloaming onto the peaceful places. 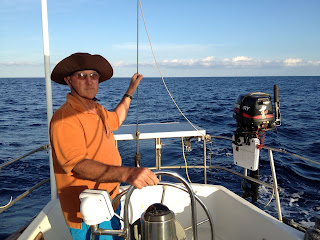 we leave Cabo at Oh-Dark-Hundred again tomorrow for a 36 hour run to Mag bay tomorrow.  might be my last internet connection for a while.
onward!!!
อนุกูล