when i'm in seattle, he days just kind of roll by, streets, people, food, and activities are familiar, similar and rather ordinary.  not so when traveling, especially in new territory, and triple especially when traveling by sailboat.  everyday we make plans, that aren't plans, that never work out anyway.  you've heard "go with the flow"?  yeah.  something like that.  this morning Gina said, "making plans here is like the ocean, it's always changing"

yesterday we moved the boat down the anchorage a half a mile, offshore of Hotel RIU.  plan was for all of us to dingy into the beach, then i'd take the dingy back to the boat.  they were going to go inland and meet up with some friends from here, and retrieve Gina's left-behind hat.  the beach landing in the surf went all wonky, safe but dramatic.  i managed to get back out and went back to the boat.  resting or sleep was impossible, because one radio or another keep going off, and i was on alert to listen for our shore party.  John came on the VHF, but his hand-held kept cutting out and i could only get two words at a time.  eventually we got across that i should take a panga (water-taxi) into the beach in front of the hotel.

that landing was much less exciting - meaning the panga touched the beach and i got off, barely got wet.  eventually found john.  he'd said "we're hanging around the pool" but i didn't ask which pool.  there were like five of them.  all together again, we walked out to the frontage road, ran into Roy and Mary, who were closing their furniture store.  we all went up the road to eat dinner, and Carlos joined us after his work.  Carlos took us to Costco, but they were closing, so Carlos took us back to the marina.  we walked way up the beach to the Mango Deck, but guess what? no water-taxi's after dark.  walked back to town, walked the entire marina walk, maybe a mile to the end and back, looking for a boat, any boat that could take us back out.  nothing.  everything locked up.  John decided to quit taking wrong turns and they went in a booked a room in the Windum hotel.  room for two people.  when the four of us went to the elevator, the security guard questioned us.  "only two people in that room"  Gina managed to go up the elevator, but the stand-out purple hair guy had to wait.  eventually john came down, gave me some money, and i struck out on my own.  we'd been told of an inexpensive hotel a taxi ride away, but after a long language fail in the phone, i decided i could just figure it out on my own.

i just kept walking past the bars, asking door guys where there was a cheap hotel.  "three blocks that way", "four blocks that way" the other way ??  finally found hotel Melida.  400 peso's (about 30$ USD), double beds, cable TV, aircon (which i didn't turn on) and beds only slightly softer than the tile floor.  but i slept.  the "hot" water was the same temperature as the "cold" water. 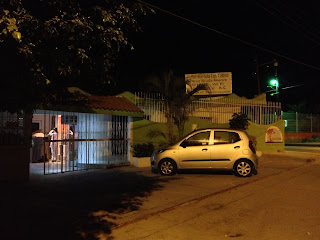 so today we're on plan 36, we're run out of letters to designate the plans.  i walked/bussed to walmart, and after i post this im walking to the RIU hotel, taking a panga to the boat, getting the dingy and bringing it back to the marina dingy dock.  and then...???

post script:  i walked to the hotel RIU, but the gate guys wouldn't let me in, cause i couldn't tell them a room number.  "i just need to get to the beach to get a panga."  no.  so i walked off down the dirt road, well, actually a sand road, trying to find my way around the huge hotel complex to the beach.  side road headed towards the beach, so i followed that, came upon a swamp which i tried to tip-toe through and got all muddy sunk anyway.  finally got to the beach, and behold!  there was a hundred yards of fence between the hotels.  gates locked.  it was a wimpy 10 foot fence with no barb-wire.  so i climbed over and fell on my ass on the other side, eliciting giggles from the people on the beach.  "I meant to do that"!  no pangas at the beach.  waited more than a half hour before i could flag one down.  finally got to the Emerald Lady, got the dingy loose and got set up to go.  the thing kept going under the stern and banging my head while i was trying to pump the air up.  i'd had the security cable still clipped to the boat.  got all that sorted out, and motored back to the harbor, which took over a half an hour we are anchored so far out now.  nearly got swamped because i was distracted watching the frigate birds soaring overhead.  but finally did make it in, tied up and went into town and enjoyed a street stall taco with egg and rice and HOT sauce.

i went looking for an electronics store to buy a plug-in for the router.  i drew a picture of what i wanted to show people.  everyone i asked said "go two blocks that way"  i'd get there, see nothing ask someone else, and they'd say "go two blocks"  if i followed everyone's instructions i would have walked twelve blocks.  the electronics store was 6 blocks away.  didn't have the plug.

the adventure continues
onward!
อนุกูล
Posted by thaikarl at 18:48