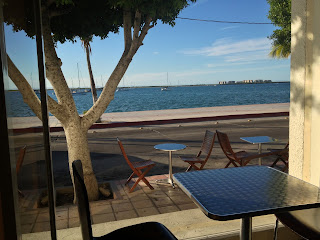 i'm sitting in the CinnaRolls Cafe on the beachfront road in La Paz, Baja, Mexico.  enjoying an espresso and a cinnabun.

today was the first day i've had to "free range" in La Paz.  john went off early on roller blades, kelly and the other crew went off on the bicycles, and i hung out on the boat for a while then took the marina shuttle the 2 nm to downtown.  i've been wandering around for a few hours, looking in the shops, watching the people taking pictures.  i sat for a long time at a bus termial and just looked at everything, and everyone.  when i'm wandering by myself, which i prefer, i stop for not much reason, turn up streets just cause i feel like it, back-track, fore-track, and sometimes just stop and stay in one place, just to watch the life and land around me.  walking around with companions tends to be more directed, like we are going someplace.  by myself, i am going thoughtfully random places.

i'm really liking mexico, the little i've seen of it.  not quite as exotic and strange as thailand, cambodia, vietnam or india, but it abounds in mysteries and discoveries non-the-less.  i'm even picking up a few words, not useful ones, but i have learned them..  like "Empuje" = "Push", cause it's on the doors of the shops.  Or "Bassura" = "Trash" cause i'ts on the trash barrels.  having an online powered english-spanish translator on my iPhone helps for more complex things like ?donde es un taller de soldaura? ?para el acero inoxidable?" = "where is a welding shop? for stainless steel"  everybody shrugs and says basically "i don't know, not here" (just like they do in thailand!)

on the way up here, we anchored up and overnight-ed in Bahia (bay) Frailes.  we dingied to the beach, and struck out across the land, intercepeted the dirt road and walked. and walked. and walked.  two miles the guide book said.  it was more like five miles, after i stuck my thumb out and got a ride in the back of a pick-up for us all.  there was a huge red fish back there, and bricks and tires.   off shore from the village lies the largest coral reef in north america.  we went snorkeling.  it was wonderful!
it was like swimming in one of those giant salt aquariums you see in hotels, except the fish were right there below me.  i counted 23 different kinds of fish.  all colors.  no wet suit required.  i was out for an hour, and not even chilled.  two tank scuba dive was 45$ USD.... someday.

i have the approaching weight of  "gotta get back and get to work - take care of family" rattling round in my head.  don't want to leave to soon tho, so i've been asking around to get on another boat going north.  have a good prospect get get on a sailboat bashing back up to san diego in a couple of days.  everybody says its a hell of a trip, up-wind and against the waves and swell all the way, rock-and-roll city.  a lot of cruisers down here don't want to make that trip, and will sail down, holiday, and then pay someone to take their boat back up for them.  simply going to the airport in Cabo San Lucas and flying back to seattle would be too, too.... ordinary. 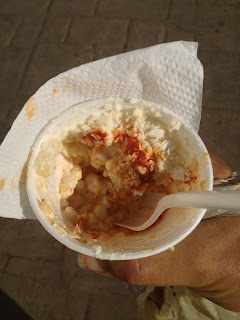 onward! sun is setting and i have a long walk back to the boat.