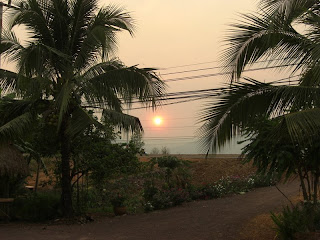 friends,
i have a project i'm wanting to work on in our back yard. i want to build a shower/steam room. just a walled space, about 4 feet high, open top, with a small doorway and a a drained floor. i can shower outside, and if i have a steam generator or some sort, i can pull a cover over the space and have a steam room. but how to make a steam generator? commercial ones cost mega-bux, i don't need anything high tech: fire; water; steam.

tok said she knew a temple down the road where she could take me that has a steam room and we could go look at how they made it. cool! so i dressed up a little and we took the motorbike about 5km south to a temple i had not been to before. the monks at this temple specialize in making herbs and barks for vitalizing teas. behind the herb house was a bamboo mat hut, and their steam generator. simple. i can do that! except i'll likely use propane instead of wood.

i looked around the temple grounds. a monk was opening the doors to the main building and invited me inside. beautiful paintings cover the walls, telling the story of the budda. i always have lots of questions - whats this? what is that? why do they do that? what does this say? Tok is pretty good about answering me, except when the concepts involved stretch her language skill. some of the things, and the reasons behind them are rather esoteric, and to a native buddist, they have seen this stuff all their life. the why's and wherefore's and how come's are lost back in the school days, now it is IS.

we went up the road a little ways to the Kao Kho park, and went up to the Than Thrip water falls. a pleasant place. not a lot of water coming over the falls, as it is the dry season. i'ts only rained once in several months. I'd love to come back here in the rainy season july-august when there's tons of water and everything is green and lush. going into the path to the falls, a falang was coming out. i stopped to talk with him. his name is hank, he's from netherlands. he used to live in sitard, which is 20 km north of where we used to live in holland. he and his wife have a gas station in a village about 20 km north of us. very nice guy. we'll go up and visit sometime. on the way back, we had lunch are a roadside place, sitting in a sala beside a big fish pond.

when we got home, i opted for the hammock, and my book. but eventually, it cooled off enough that i went out back to work on my shower stall area. i had to remove an old stump, at least low enough to be below the concrete floor. took me an hour and a half wacking at it with and hatchet to whittle it down. HARD wood. really pissed off the little termites that (used) to live inside.

next monday we goto vietnam! onward!!!!