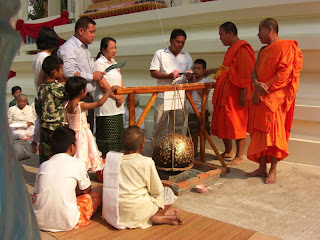 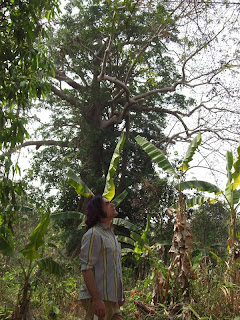 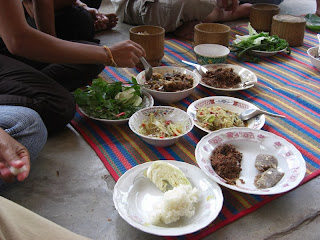 friends, today we got up early and went to a FANG LUUK NIMIT, which is the dedication ceremony for the most beautiful building in a thai temple area.  the building is called a Bot (sounds like 'boat') and is the most sacred part of a temple.

they have these large round stones called Sima that they drop into holes around the Bot to mark the boundaries.  the stones get gold leaf touched to them before they are dropped in the holes.  later they build these structures over the boundry stones.
i'll have to go over the details in a later post, as we have to get our stuff together to goto vietnam tomorrow.  leaving at 6am.
there were some hundreds of people there.  they had a new monks ceremony afterwards where young guys enter the monastery.  we were with some friends/relatives of Toks.  we rode out there in a pickup truck.
i met a Norwegian guy named harold who has been living here ten years.  im going to try to find his house and visit when i come home next time.
one of the women in our group told us there was a big old tree nearby.  we walked down the road and visited the thing- it was huge.  hollow inside.  very cool!  and of course, there was lots of food!
varnished two more rows under the house today.  i'll have it done in another week at this rate- when we come back.
i've created a YouTube video channel for Thai Country Life where i'll post just videos from here.  the address is:
http://www.youtube.com/thaicountrylife   there's only two vids there now, but more to come.
talk to you from vietnam next!
ONWARD!   Nu
Read my Thailand adventure ::: http://www.thaicountrylife.com