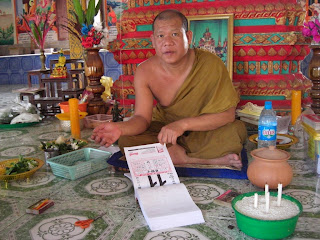 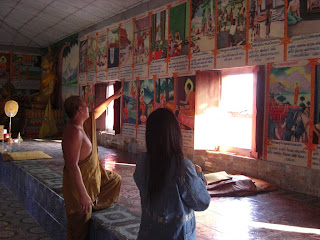 the day  has been fortold.  the time is set. the wedding of tok and i will be on november 11, 2008.  which just happens to be 11/11, so obviously the time for the ceremony  will be 11am.  unless that conflicts with some other rule i don't know about yet.

how did we arrive at the day?  we went to see a monk. that's the customary way to decide.  i asked tok if  we could go  to the temple after she returned from  town. we got on the motorbike and headed out towards lomsak.  we turned on the road to pitsanolok, and after a while turned off to a country road.  off the  main roads, there are roads that go all over the area, no signage of course.  the roads are sometimes paved with concrete, especially in some villages, but otherwise they are red dirt.  this time of year, the dirt roads are hard packed, but i can imagine that in the rainy  season they are a slippery sludge of mud.  i enjoy it when we veer off the main roads like that.  so many interesting things to see in he little clusters of houses and the spread fields.

eventually we came to a village where the temple was located. why we went to this temple, instead one of the two or three in our village, i don't know.  inside the grounds we parked the motorbike.  the monks were out teaching somewhere, but they would be back in an hour.  some workmen were spreading stucco cement up on a scaffolding surrounding a very  tall tower.  come kind of stupa/like building.  the scaffolding was of constructed of bamboo.  each of the joints is held together by a loop of rope tied to a stick.  the loop is wrapped around the joint, the stick is twisted to tighten the rope, and secured from unwinding by a piece of wire.  the whole structure looks spindly and un-safe to western eyes, but they have no problem clambering all over the thing.  there was yet another building under construction nearby, and a couple of budda-halls, and in the back houses for the monks to live in.

i roamed around taking pictures, and looking at the wonderful thai style art work in paint and concrete that  adorns the temple buildings.  i really am fascinated by the thai style of traditional art.  i work at copying it in my drawing books, but i'm still pretty crude at it.

the monks arrived in a pickup after about an hour.  tok talked the  monk for a while, and he lead us into the main meeting room of the temple.  this is a large open room, with a row of shrines in the middle, budda images in the corner, and a raised level in the south wall where the  monks sit during services.  the walls are painted with scenes from the life of budda.  in this place, there were two rows of paneled scenes.  twice around the room told the whole story.  some 74 panels in all i believe.

we sat in the tiled floor before the monk. he and tok were talking for a long time.  i listen and try to pick out words.  one in a hundred i recognize.  the monk opened a daily calendar and started flipping thru the pages, occasionally asking a question.  he also had another book that he consulted that had all kinds of charts and tables, pictograph and diagrams.  there was counting on fingers, page flipping, back and forth chatter.  meanwhile i'm just trying to keep my legs from going numbing sitting cross legged in the tile floor, and trying to keep my back straight so it doesn't start cramping up on me.

eventually the monk settled on two dates:  November 11th, or November 15th, our choice.  i liked the 11th, tok thought that was fine and we confirmed with the monk.  there was more page turning, chart consulting etc.  tok gave me 100 baht (3.00) to give to the monk, which i dropped into  a basket he pushed towards me, and we were done.  monks are not permitted to take anything directly from a women.

so now we have our wedding day.  yall are invited of course!

i had some questions about some of the story panels on the walls, as i hadn't seen this part of the story before.  they seemed to predate the birth of the  budda and had something to do with a story about an old man.  i asked tok what the story was behing these pictures.  she was explaining the story to me when the  monk returned to the hall.  seeing our interest int the story, the  monk started explaining the story  in each panel, all in thai of course. i listen politely, and tok did also.  somewhere around panel 15 i whispered to tok that it's going to take us till tomorrow to get too panel 78.  she found a way to politely break of the lessons, and we went back out to  the  bike, and motored off back home.

11/11... sounds like a good day for a wedding eh?  that is just after the rainy season in thailand, it's turning dry and cooler.  a nice time to visit thailand if it's your first time.

now i just have to save up for  the wedding party. thai weddings are fun.  there is the ceremony  with the monks in the morning, then that afternoon and evening the hosts feed everybody who comes.  there's drinks and dancing.  usually  there is at least a D.J. spinning CD's.  bigger weddings will have all the way  from a couple of stage dancers up to giant elaborate stage shows that go on all night, and everybody  from villages all around show up.   ours will be rather laid back, tok is guessing 50 to  150 guests, depending on how  many passersby stop  in for food and drinks, how many people invited, and how many falangs (that's all of  you reading this) actually appear.

im actually looking forward to it.

more to be revealed...
Nu and Tok
more photos at:  Thaikarl Picassa Gallery
--
Read my Thailand adventure ::: http://www.thaicountrylife.com
Posted by thaikarl at 06:40