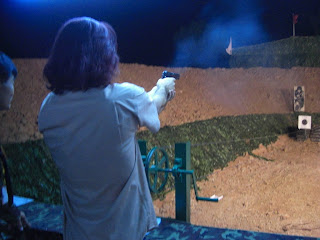 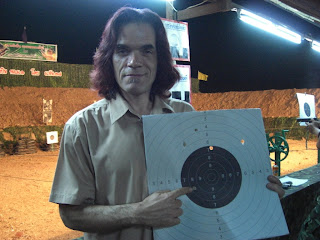 we had some fun last week. well this week also, but i'll have to get to that later. we needed to goto phetchaboon, which is the nearest 'bigger' town to visit the government business office to get some information, and to see if we could find a transformer for my tools. tok's friend mod (sound like 'maude' but said very fast) offered to drive us if we bought gas. it's about a half hour drive from our village.

there is a fair of some unknown reason set up on a big field north of the town center. we went there, bought some lunch and lookded around some. lots of booths selling the usual stuff- food, cloths, knacks. but at the back of the area was a ferris wheel, and i could see a "Wall of Death" set up back there. I like fairs. obviously the best time to come would be at night. mod said she would take us. we can bring mama and teri too.

finding a place to park the car took a while. i'm used to the motorbike, which you can park anywhere quickly. we found a spot along the back of the field and we all ambled into he fair, at the speed of mama, which is not quickly. i could hear a popping sound comeing from somewhere. as we got closer i realized there was a shooting range. woo hoo! i booked over there, and discovered a slug pit bulldozed into the ground, a long shooting bench and army guys helping load the guns and setting the targets. tok and i went to the table where you could buy ammunition. hmmm, .38 special, .45 ACP, various rifle cartridges, 9mm. i selected a bag of .45 ACP lead bullet wadcutters for 120 baht/5 shots. (4.00 USD) they had jacketed .45's but they were more expensive. they gave us a big paper target and down to the range we went. a solder loaded the clip and handed me a 1911a .45 ACP semi-auto pistol. my favorite handgun in the whole world. 5 shots - 2 in the black. i had to go back and get more. Tok took two shots, one in the black, one outside. pretty good for her first time ever shooting a gun. i popped off the other three rounds and sorely resisted the temptation to run back up and get some more ammo. like the beatles song "happiness is a warm gun"

the rest of the fair was a little moore mundane. i paid 30 baht to go up and watch them on the Wall of Death. One motorcycle rode around and around, followed by a pickup truck. teri and mod rode the little roller coaster, i bought some sugar cane so mama could feed the elephant. we had some food and ice cream and looked at the furniture and of course the cloths and other goodies.

they had a games fairway of course. ring-toss, knock-over-the-bottles, and everyones favorite, judging by the number of booths devoted to it, the balloon busting booths. 20 baht buys (.66 usd) buys 7 darts. you have to break 7 balloons to win i prize. i lost. twice. enough for me. Seems like it should be so easy tho. but the tiny spaces between balloons magnetically attract the darts.

we all had fun that night. mama is quietly delighted by such things. never complains, that i know of, even though we drag her all over the place.

i think the fair had someting to do with army day, as there were exhibits of military hardware like troop carriers and big machine guns.

good fun for the whole family.

--
Read my Thailand adventure ::: http://www.thaicountrylife.com
Posted by thaikarl at 18:25