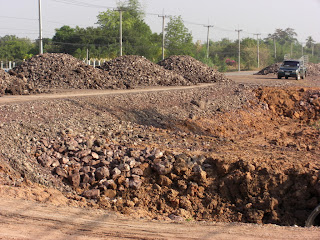 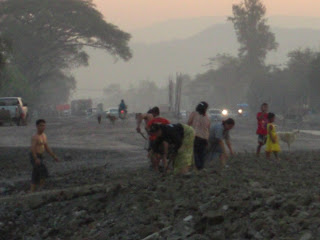 finally did some work today. not a lot but some. it's been pretty much relax and read time since i've been home. busy enough in bangkok, but life in ban dong khwang has been books, coffee and naps. till today.

they dumped some truckloads of crushed rock up on the big road. everyone up and down the road has been going to these piles and collecting the biggest rocks to line the walls of their new driveways. each plot of land had to buy big cement pipes for the deep drainage ditch that runs beside the road. they piled dirt on top of the pipes and leveled it somewhat crudely to make driveways to each plot of land. the dirt walls of these driveways will erode in the rainy season, so with all the "free" rocks in the piles and along the graded edge of the road building, people are taking advantage to gather the rocks to wall up the sides of the dirt.

it's been like COLD the last few days. the sun came out today and it got warm, so i was let off during the heat of the day. but come sundown, when it was cooler, tok gets me away from my book to load the big rocks in the cart and haul them to our drive, and toss them down the slope. after 3 loads i was ready to quit. but she said we needed more. not to be wimpy, i helped make two more loads, and thankfully it was too dark to see the rocks by then.

but my next job will be to move all the dirt that has already slide down the slope, break up the giant clods of earth sticking out the sides, then stack/place the rocks from the bottom up to make a proper erosion barrier.

at least the rocks are free.

Tok went to the market for a little while.  when she came walking back, there were lots of people out grabbing rocks.  I had the hoe out and was hucking the big rocks out of the pile with mama.  Tok told me that the people were very impressed that i was out working on the road.  and they said it was very nice of me to come round to greet them when i arrived.  That was because the day or so after i arrived home, i walked by myself thru the back yards and said Sawatdee Kap (HI!) to the neighbors, and relatives and kids.  if you act like a neighbor, instead of an aloof outsider, they think you are a neighbor.  doesn't seem to matter that you can't say anything more than Hi.