i had some things to do in town.  Tok was busy with the tamarind stand, so i dug out my helmet - there's police checkpoints on because of new years- got the keys and headed into town.  man, it felt good to be driving a motorbike again.  even if it's not a real motorcycle.  it's one of those newer Honda Clik!s 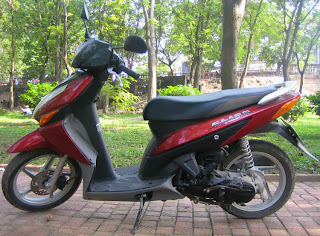 twist and go (no gear shifting) 90cc motorbikes with step through frame like a scooter, but has 16" wheels.  rapidly reminded that i had to get in motorbike mode, scan the ground ahead for bumps, holes, sand on asphalt and other hazards.  and to be aware of slow farm vehicles in the bike lane, faster bikes coming up behind, slower bikes ahead, people going the wrong way on the road, trucks and cars whizzing past my elbow at 100kph and other vehicles from bicycles to 10 wheel trucks appearing out of side roads suddenly. and to be mindful of driving on the left side of the road.  turning at an intersection takes some thought, as you need to turn into the proper lane going another direction.

since Tok and i are almost always together when we go anywhere, i always have a little bit of the feeling like mom let me take the car out all by myself and i want to drive to fast and free range... I can go anywhere i want to go!  but that's just the feeling.  i had a list of things to get done.  i needed to find a young guy named Tam about an art project, goto the glass shop, go make an appointment with my dentist, find some green bun, change some money, and get electrical stuff for my boat at the tent market.

an expression you hear often when you go looking for a specific item is "Mai Mee" which means "Not Here"  actually, 'here' in thai is 'Nee' so they might be sayin Mai Nee, but it sounds like Mee, with an em.  Mee with an "M" might be "Lom Sak language"- which exists.  [every now and then Tok will say a word is "Lom Sak language"  I learned on my early trips that "Pai nai" means "where go" or "where are you going" but in Bangkok they say "Penai".  I kept hearing people around here say "Pa dai" and i asked Tok what that means, she says it's Lom Sak Language for "where you going?"  no wonder learning Thai is hard], but lets go with what i think i hear, which is "Mai Mee" = "not here"

i went to the electric shop where the boy works.  he wasn't there. "Mai Mee". i tried to ask the three other people there, but they didn't understand me.  i even imitated his curious slouching stance.  nothing.  when i imitated drawing on my hand, they pointed me up the block. saying "Hanin". so i figured Tam was up the block at a place called Hanin.  no idea where that was or what it means.  but i walked all the way to the main intersection.  nothing leapt out at me.  the honda mechanics on the corner asked if i need help - in english.  i said i was looking for "Hanin" and they pointed me back down the block.  Hanin was an electronics parts store.  i tried to ask about the boy, got a chorus of "Mai Mee"'s from the four ladies in the shop.  gave that one up.  went back to the electric shop and remembered i had a photo of him on my iPhone.  showed them that and woo hoo, they got it.  but it was more Mai Mee.  they said "Mao"  which means drunk or something close to that.  gathered that he'd been partying for new years and wasn't at work today.  okay.

without talking to Tam, i had not enough information to goto the glass shop.  so i went to three different 7-11's (they are like starbucks, all over the place) for green bun... 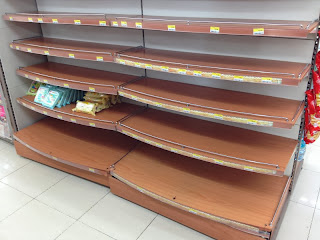 So i went to my dentists.  there wasn't anybody in the waiting room and nobody in the chairs.  there was a women - an assistant, and an older man.  i did the "tooth cleaning" pantomime, got "Mai Mee"  the old man said "gin koaw" so i figured out the dentist was off eating dinner.  i tried to ask if i could come in tommow, pointing at the calendar, wristwatch motions etc.  got a lot of response, but no clear understanding.  so i went outside.  remembered i had a Thai dictionary on my iPhone (love that phone) showed her the word for "tomorrow" and "cleaning" but it didn't go off to well.  later i realized i was showing her the "Tomorrow" that means 'something in the far future' not the word that means 'tomorrow-next day'  eef.  so nothing worked out there.

since i was doing so well so far, i thought i would at least score a couple of scoops of "Ma now" or lime ice cream that i like.  went to a dealer near the market that us usually there.  guess what?  Mai Mee.  ah, but there is another one inside the public market.  GOOOOOOOAAAALLL! 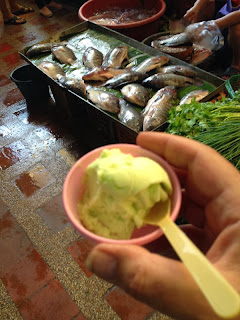 I went to the bank in Big C supermarket.  Changing a random 60$ US i had in my bag.  That worked okay, except they didnt' like the twenty dollar bill "too dirty" and wouldn't exchange that.  No green bun at Big C either.

i sure wish i could get the hang of learning even basic thai.  it just doesn't stick in my brain.  i worked really hard to learn how the numbers work, but i still get them messed up.  every numeral has a name. you don't say "twenty thousand baht", you say "Song Mun Baht"- meaning two ten thousands baht. try to do math with that!   i'll keep trying tho.  but when i free range, i'm painfully aware how much my english speaking wife carries me around.

but it's all fun.  not their fault i can't talk, or understand either.

buzzing back on the motorbike, i had to be especially vigilant.  schools were getting out, so there were a lot more motorbikes, and stopped cars picking up kids.  i was so focused on driving and sucking in the awesomeness of the countryside wizzing by that i went right passed the tent market where i was going to buy the electrical stuff.