Hope every one has a happy and good new year.  we're a day ahead (15 hours from Pacific time), so it's almost gone over here.

Most everyone gets a long holiday at new years.  out here in the country, that means that all the kids are off school, and the people who work off in other places come home for the long weekend.  which also means many people, especially the younger folks, crank up their 10,000 watt stereos and blast away.  the guys next door were playing thai pop music with so much bass the windows in the bedroom house were literally rattling.  then they'd turn it down, then an song they liked would come on and they'd crank it up again.  i went out on the porch to try to see what kind of machinery they were using to pound out all those decibels, and it was coming from someone's car!

tonight tok and i went to the fair at the monument park down the road.  the usual booths with cloths, shoes, cds and videos, and lots of food.  stuff you find at most fairs.  i bought a few stands of LED strip lights for the boat that would cost five times as much in the states. 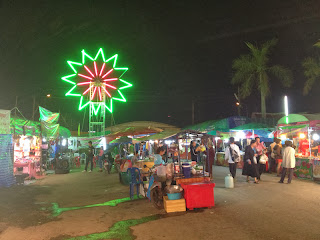 we're home now, Tok has already gone to sleep.  Teri is watching TV on her computer- they stream the TV stations online here- and i'm up on the computer.  The people who own the big nice house up the road about 500 meters are having a party.  of course, they have a huge sound system, and they are singing karaoke.  you can hear every word and drumbeat, like it was in the next room.  none of this "quiet at 10pm" stuff.  well, it is new years after all.

Tok has been spending all day at the tamarind stand, and will for the next four days, til the new years tourists slack off.  she's doing fairly good business.  strange way they do things.  there's 5 stands lined up right next to each other beside the road.  all selling  the same thing- tamarind in all it's varieties.  there are groups of stands every kilometer or so on the roads away from the  mountains.  people stop, sample the tamarind, buy a bag and head off.  why they stop here, and not at the previous 5 groups of stands i have no idea.  i don't get a sense that the vendors are hard-core competing with each other.  the customers seem to choose whose stand they stop in front of, and that stand gets the sale.  the next car might stop at the beginning of the row, the next at the end.  more amazing is the economics of doing the business.  Tok had to go to the government office and pay them something like 3 dollars for a permit to put a stand on the governments roadside.  that's it.  no inspectors.  no other permits.  sales tax collected- zero. (as far as i know)  you want to do a little business for a short time, just do it. (ouuuu, the current karaoke singer has a horrible voice, way off key)  she had to pay rent an awning that has metal poles and canvas roof (a common business round here, renting awnings and plastic chairs) and pay for some workers to make a bamboo pole floor and all.  she'll keep all the bamboo and wood poles after she closes down.  the whole thing is made with a few nails and a lot of twisted wire holding it together, so it will come down easily.  (much better singer up now... well, maybe not :-) 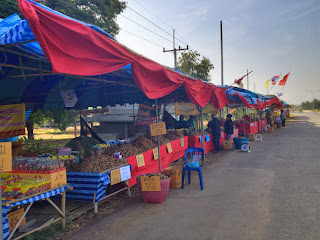 since i've been here over a week, i'm naturally sliding into my normal night owl mode.  when first get here, it's easy to go to sleep at 8pm when tok does, and get up before the sunrise.  by my natural internal clock starts to manifest itself, and i stay up later, and sleep later.  slept in til 8am this morning!  when i was here for six months last time i was home, i slide into 3am to 10 am.  harder to do in the spring time (april is the hottest month in thailand) cause the sun comes up, beats on the house, and it turns into an oven inside by 9 am.  the neighbors behind us went to live somewhere else, and his fighting chickens are gone, so i don't have roosters starting to crow right outside the window before dawn anymore.  that's different.  their kids are still living there it seems.  the property has become really trashy, and the big shed where he kept his chicken stuff is all falling apart.  i'm hoping that the bank will repo the house and we can buy the house and land for cheap someday.  after i pay off the boat.

big explosions going off everywhere, must be time.  yep, my iPhone just rolled over to 00:00

"I am i that is me, but not you"   - Zeno America Das Leben ist ein langsamer Tod!