the week prior to leaving for home in thailand is always hectic.  things to buy, stuff to gather, details to arrange.  when you take a two week vacation and forget something, no big deal, it will wait.  when you're gone for two months to the other side of the world, it's a bigger deal.  but i always forget things, or run out of time.  oh well.  i usually don't sleep at all the whole night before i leave, pack my bags and organize stuff.  so when i get in my seat, i'm asleep well before cruising altitude and sleep my way across the pacific, mostly.  waking to eat, and walk the stagnate blood out of my legs - 12 hour flight over.

i fly exclusively Korean Air.  tried all the other guys, some are okay, some suck, i like korean air the best.  especially because if i choose the right flights, i get a 23 hour layover in Seoul on the way over, and a 12 hour layover on the way back.  a free day in korea! go through immigration, get on the airport bus or subway and i'm in the city in two hours.

for the overnights, i've stayed at jimjillbangs - korean bath houses++  there's not a lot of willing english speakers in Seoul, and my iPhone won't work unless i find free wifi, so i pre-search as much as i can. i read about a place called "Riverside SPAland that sounded good.  i screensnapped maps, subway stop and satellite pix of the neighborhood.  2 hours out of the airport via the subway trains i arrive in the vicinity, and tried to match the aerials with the buildings i could see.  after a few turn-arounds a saw a signboard: 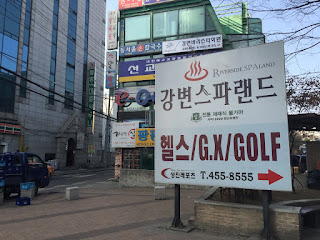 Right at the top "Riverside SPAland"  okay.  but where now.  i thought the arrow at the bottom was pointing to the golf thing, maybe? maybe not? but to the left i noticed a sign over a doorway that had the same logo - steam coming off a circle. 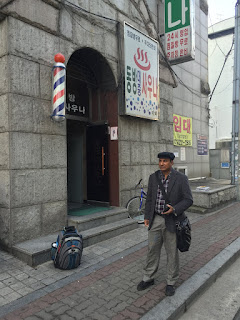 so i figured, that must be it 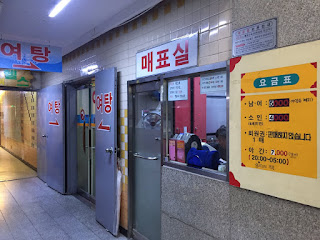 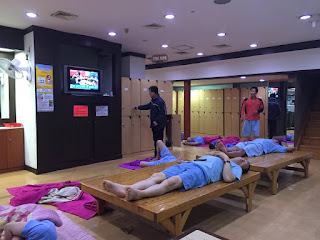 there are men laying around on the floor on on platforms wearing the little t-shirt/shorts they give you.  put my shoes in the shoe locker, give that key to the desk guy, who gives you a locker key and a clean blue t-shirt/shorts.  tried to stuff my bag in the little locker and a guy comes over and waves "no no" and points to a gang of luggage.  oh, big bags go over there.  take off all my cloths and put in locker and head over to the spa.  it's small, has only three hot tubs, a cold tub and maybe 20 sit-down showers and a few standing showers.  i sat down, showered and scrubbed with the scrubber the man gave me, rinsed off.  sat in the tub for a while.  none of the three or four guys in the spa room even looked at me.  i did go in the steam room for a while, but there was a man laying in there, sound asleep and snoring loudly.  when i came out, a non-korean man saw me from over the wall and said "hello!"  after i'd dried off and put on my shorts and t-shirt i was sitting on the platform wondering where the hell i was.  where was the jimjillbang part?  the floors and floors of special rooms, juice bars, computer room, sleeping rooms, mats everywhere, tv room?  i couldn't see a door that seemed to go up.  nobody understood my questions.  i was beginning to think i was in the wrong place.  started to have that little anxiety you get when traveling that maybe you've blundered in the a less-than-desirable spot, you don't know where you are, don't know what to do, and you don't understand what's going on here.  why did i get mis-directed to this little place?

the answer emerged from the spa, put on his outfit and came to talk with me.  meet my new friend, Prince William: 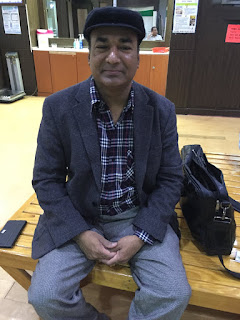 (photo take the next morning)

he's from Pakistan, lives in Seoul now.  gets odd jobs in restaurant kitchens and the like.  with very fractured accented english, we exchanged who we are, where we are from's.  and he told me that "this is it.  this is all there is here."  the fancy place is down the street, but "very expensive" (yeah, like 15$ USD)  he showed me the 'sleeping room'  a room maybe 5 meters square, with mats on the floor, and ladders to upper bunks.  each had a thin pad, a blanket and "pillow" filled with gravel. (actually beans or something organic)  i was tired, i was were i was, i paid already, had a shower and a hot soak.  so i climbed into an empty bunk, got arranged and tried to just relax.  the rock pillow wasn't doing it for me, so i got my air pillow from my bag and got back in.  sleeping on hard surfaces i can do.  it's painful, but i'm used to it.  sorta. what i'm not used to is 10 snoring men in the room. okay, this is the adventure, calm down, relax, get into the daime space.   aaaaahhhhh.

in the morning, shower, soak, dry and dress.  Prince William wanted to take me for breakfast.  when we got outside, in the daylight, i could see the signs better.  the jimjillbang Riverside SPAland was where the arrow was pointing: 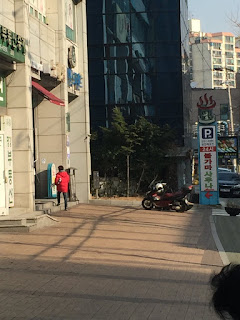 (another icon, and arrow pointing to the doorway behind the person in read coat)

next time...  we went for coffee at appropriately named "Coffee Land".  Prince William then took me to a breakfast shop, for a egg sandwich - egg, ham and cheese between grilled bread.  nice.  about 2$.  he insisted on paying.  he got a call about a job for the day, so we parted. here i thought i was in the wrong place, but then i met Prince William, i know where a very cheap overnight place is, i had showers and sauna, and have visited one more tiny area in Seoul.  you are where you need to be it seems.   i took the subway to a stop where he told me there was some interesting shops.  i had just time enough to walk a few streets, had another egg sandwich and went back down the tubes.

Koreans favor black cloths i noticed, and 9 out of 10 people are on their phones.  all the time. 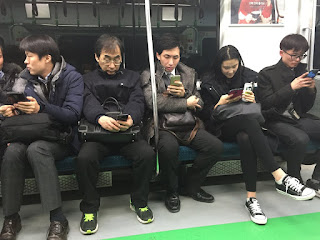 not just the young people either.

2 hours on the trains, back at the airport.  FaceTimed with my sister in shoreline. (free wifi in the airport, everywhere)  she was amazed that we were video calling across the ocean.  then on to another flight, 6 hours to Bangkok.

and the next phase of the adventure begins.  the one i have been waiting for for years now.  getting to see my lovely wife and daughter, and basking in the  warm glow that is Thailand!