On Wed, Mar 10, 2010 at 4:54 AM, <lxxxxxxbxxxx@aol.com> wrote:
oh wow cool. So, the house with the computer, is that the one that you send pics of, it's like on stilts kind of? or looks that way. 105 eh? wow. So, they have electricity and all? not to sound stupid. Is her mom ok, or did she pass? I remember she was sick. The house where you send the original picx, is anyone still at that house?


yes, our computer is up in the 'bedroom' house. that's the one i had built that is up on stilts with the blue roof. on the left in the photo.  we even have DSL broadband... usually.  not super fast, but when it works, it's a heck of a lot better than dial-up or an aircard. 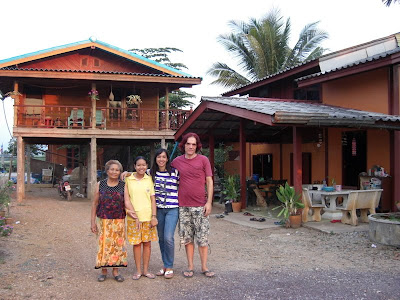 the orange house on the right is the original, main house where mama, and teri sleep.  my wife (an i, when i'm home) sleep in the bedroom house.  we do indeed have electricity.  thailand is a developing country, but everyone has electricity, unless they build out in the mountains and don't want to pay to have the lines strung.  we didn't have running water until last year, when the village put in a pond and pumping station.  so there's a PVC pipe that runs along the rain ditch in front of all the houses, then runs to each house.  we had a guy run PVC from the tap to the kitchen and bathroom, so there is water at the sink in the kitchen and a shower head in the bathroom.  but the village water costs money, so we mostly use well water for everything.  and the village water is only on during the day.  it shuts off at night. there's a 2 inch hose from the well and an electric pump.  we move the hose around and fill up the big jars for bathing and washing water, watering the plants and filling the fountain pond.

my mother in law is still kicking around.  her single kidney is slowly failing, but they are treating that with medications and careful diet.  eventually it's gonna kill her, but not till later.

life in the country where we live is basic, but not so primitive anymore.

and yes, it was 105 degrees Fahrenheit up in the bedroom the other day my wife told me.  this is the early part of the hot season in thailand.  getting up around 100 F every day now, high 70's at night.  Phitsanulok is about 70 miles away from us, here's the weather there.  and it's in the mountains, so usually a little cooler.  thanks for asking.  i can't wait to be there,
Posted by thaikarl at 19:54