look at this photo: 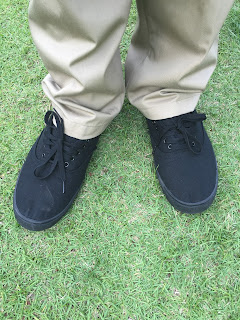 you are seeing something that many of you have never seen:  i'm wearing shoes :-)  the reason i came home at this particular time was to be present at Toey's ceremony to receive her nurses cap.  a rather formal affair, and my wife suggested i wear shoes instead of my normal sandals.  arrgh.  i was in walmart talking with her on the phone, i txted her photos of shoes to find some that were acceptable.  9.99$ walmart specials.  i'll probably never wear them again.

we stayed at teri's room at the "K Mansion" she slept on the floor, tok and i had the bed.  the Saturday of the ceremonies, we all dressed up sharp and went over to the nearby university campus.  Toey has been in university nursing school program at Rangsit University in Bangkok for the last four years.  so all my savings - what would be my travel money - has been going to pay our share of university and living costs for her.  that's why i haven't been home in four years.  it's been a struggle.  most of you know i lead a pretty spartan life, foregoing what most people consider normal living conditions.  it was tense at times, but we got there.  she's been a solid C+ student, passed all her exams and was ready to officially become a nurse.

there were hundreds of people at the meeting hall.  seemed like a couple of hundred graduates and their families.  lots of milling around the hallways, taking hundreds of photos, laughing, smiling.  all the nurses looking so sharp and pretty in their white uniforms and show make-up.  when teri was growing up, my nickname for her was "noo noi" or "little mouse"  she's not looking like a little mouse anymore.  i've had to change it to "noo Hyi" - "big mouse". 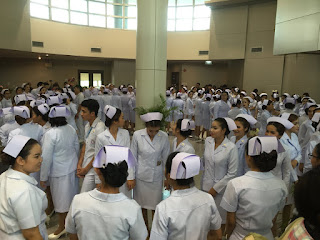 there was a certain amount of nervous tension in the air.  all those years of school, all the quizzes and tests and study. all the mistakes, the waiting to see of you passed-  it's not over until this event is over, and everyone wanted to to be done in good form. we were finally ushered into the auditorium and seated with the rest of the proud parents and friends.  the nurses-to-be sat in the front.  there were lots of speeches and presentations.  of course, i understood none of it directly, but i'm sure it was the usual ceremonial wordings.  finally, all the students filed out to the back of the auditorium and up the outsides, in carefully choreographed lines, to have their name called out to receive their awards. 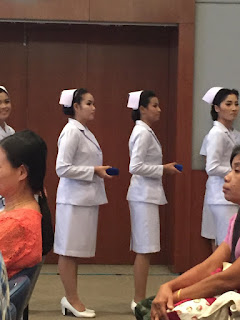 Toey is second from left
​

it was quite impressive.

the line-file-ordering caused me to remember my high school graduation.  i was a bit of a miss-fit my last year of high school.  the principal graduated me to get rid of me.  since my last name put me at the head of the line, i was leading the order of march out of the chairs to the stage and back.  it had to be done exactly, else people would be coming out the same row that the returnees would be entering, where there would be a traffic jam and people would have to step around each other..  very clumsy.  so principal pleaded with me to get it right the night of the ceremony.  i assured him i had it down.  when the time came, i looked the principal directly in his anxious eyes, and went left, instead of right, creating the traffic jam and jostling he was so afraid of.  i was just as glad to be rid of him as he was me.  there were no such rebels in this procession.

graduating nurses receive a black band of fabric that they pin along the top of their nurses caps. at the end, all the fresh nurses got up on the stages in rows for the adoration of all, and lots and lots of picture taking.  they look so smart and orderly, smiling, proud, and humble at the same time.  very moving. 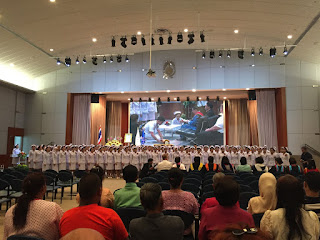 all the new nurses picked up small garlands of flowers to bring to their parents and supporters.  Toey came back to our row, knelt down in front of me, handed me the flowers.  she looked up at me with her beautiful brown eyes and said "Thank you Papa!"

The three of us burst into tears. 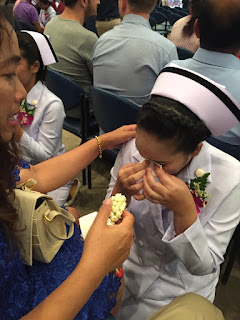