these are some rolling days, one flows into the next and the next and the next.  far to quickly i'm afraid.  really begining to feel the tension of departure.  sux.
Toks tamarind business is keeping her quite busy.  she drives off early in the morning, usually by 9:30 am, and might not come back until dark, around 6:30pm.  she goes out looking for and buying processed tamarind, and takes it to the various buyers.  some nights when she gets back, she has a whole truck full - one metric ton or more (2,204 lbs) in 10 kilo bags.  some nights we have to repack everything, especially when the workers used odd or whatever bags, and didn't put them in exactly 10 kg packages.

i spend my day while she is gone hanging around the house, running errands, shopping, internet, playing guitar and working on my projects.  today i took the motorbike into town, paid the land-line bill, went to try to straighten out a bank problem, moved cash around, bought more 16x26 bags for the business, went to the post office and bought some food.  when i was motoring back, something beside the road caught my attention, i saw a boy running quickly in the opposite direction beneath a walking overpass, just a flash, and i saw a motorbike on its side on the ground, and another bike parked next to it.  i was moving right along at 70 kph or so and quickly was far past the scene.  something about it didn't seem right, maybe there had been an accident, or maybe something fell off the kids bike and he was running to retrieve it?  i stopped beside the road and looked back, but it was hundreds of meters away by then and i couldn't see anything out of place or notice any activity back by the flyover bridge.  i would have had to turn around and drive the wrong way on the road for that distance to go and check, that didn't seem prudent.  but it still had me puzzled 'cause i felt something was wrong with the picture.  so i carried on, dropped off my shopping stuff at the house, and rode to the other side of the village to take some photos.  i'd burned up the remaining gas in the motorbike on my travels, so i decided to head back north, past our house to the gas station and fill the tank. the gas station is right across the road from the flyover bridge. this is what i saw there: 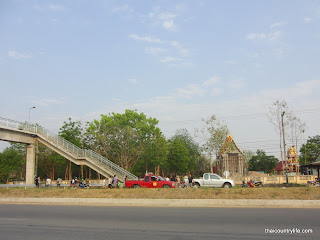 lottsa people, police, emergency truck.. There had been an accident, likely moments before i passed the place and saw the boy running.  i felt pretty bad, i was right there, but it was not obvious at the time that an accident had occurred, it was just a flash of activity that seemed peculiar.  i saw the results of a traffic accident last trip, and it was really traumatic for me.  i'm not interested in repeating that vision.  if i was first on the scene, and people needed any kind of help, i'd be right there, but if it's afterwards, and there are already people responding and taking care, i don't need to "just have a look" Tok and i were sitting on the porch a couple months ago, she was applying some stuff to her face and we heard people hollering up on the big road.  we went down to the gate, a ways down the road to the north i could see a dark shape - a body, and nearer to me, a bicycle on it's side in the far lane.  that's all i needed to see. there were 10 people up there already, and more coming, so i knew there was nothing i could do, and i started to have that whirlpool feeling in my belly again, like last year.  Tok went up to see what was going on, i stayed back in the yard.  when she came back, she said the man was dead, hit by a car as he was riding his bicycle home.  the man rode 7 km into town and back every morning, to have breakfast at a restaurant in lom sak.  the car vanished, as they usually do.  the next morning, Tok told me that at that same spot, a pickup truck ran into the median late in the night and flipped over... fatality.  I asked her if it bothered her to see the bicycle man, she said no, she'd seen such things many times, and it doesn't bother her.

accidents and death aren't all hidden away here.  accident scenes aren't all taped off so you don't see anything, there's not usually police directing traffic away.  when someone dies, they keep the body at the house (in a refrigerated casket) and everyone comes to the house for days.  funeral processions aren't lead by a smoke glass limousine at the front and a line of cars with their headlights on, the body is in a colorful casket, on an ornately decorated platform in the back of a pickup truck, music plays over loudspeakers as they drive to the temple, and the body car is followed by more pickups, cars, motorbikes and even farm trucks.  i'm sure it's different in the metropolitan areas, where people live in apartments and condo's, but we live in the country, and the process is very visible.

so many times in my life i've left situations just before something bad happened, or i arrive after it's all over.  today it was in-between.
onward.

Footnote added 120312:  one of my readers replied and had this to say:


The other sane reason, though far from a human one, yet a very practical point as life as a gaijin or farang in a far off land, is not to further involve yourself in something where you are not already. If I was there and at that moment could do something significant to aid or help out, then by all means I'd be the first to jump in and sacrifice to help out without any concern for my own well-being. But after the fact, with others and local competent people around, nothing to be gained from that kind of samaritanism than to further" implicate" yourself as the foreigner or outsider or different or "other." We have to be constantly vigilant of that fact, as much as I enjoy a laid-back lifestyle it's a somewhat necessary reality of life abroad. All it takes is a moment failing to concentrate, not paying attention, or brief lapse of judgement for the system to come crashing down and attack and eat one of its contributing members. Not to sound overly negative but I've read enough about horrible things happening to otherwise good-intentioned, forthright people. Particularly in asia. This world is still very much Darwinism in action and the powers that be will tear you to shreds for practicing your humanity. I'll still be the kindest person I can be, but I'm always cognizant of this perceived reality.

Something to keep in mind when your better angels are tugging at your heart-strings.

I was very glad to get his message.  and i do agree with him.  i am usually quite aware that i am a guest in this country and it's only a stamp in my passport that permits me to be here at all.  i can't risk having that stamp revoked by my not paying attention to this fact.