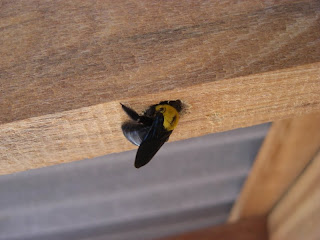 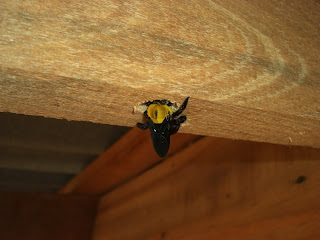 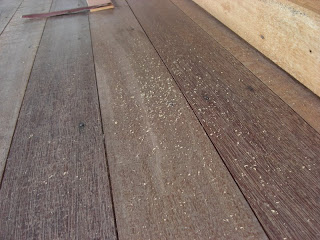 friends,
scroll down an view the pictures first, then read.
The yellow and black creature is Bob.  Bob Bumble Bee.  I  asked Bob what his name is. He said "Bob".  "And DON'T call me Buzz. I hate that." he added. Bob has decided to live in our bedroom house.  Notice i didn't say he has decided to live WITH us, no, he has actually decided he wants to live IN our house. Literally.  He's gnawing a hole underneath one of the rafters on the porch.  you  can see in the third photo, that like house building contractors everywhere, Bob leaves his wood dust on the  ground.  Doesn't bother too sweep up.  I asked Bob about this, he said "I'm a house builder, not  a janitor".

I said to Bob ""Of all the wood joints in all the towns in all the world, you walk into mine."  He said, "That sounds familiar, where did you get that from?"  I said i got it from a bumble bee named Bogart.  "Oh, Bogart's a bad bumble bee, buddy, better be booking a bus ticket and bailing out on Bogart Bee."  Bob said "Why not build here? Wood is easy  to nibble off, it's under a roof and i like it here."

Of course my wife wasn't to happy to see Bob.  First thing she does is takes a broom and wacks at him.  "He's makeing a hole in the house!"  The locals see bugs like Bob as a nuisance when they decide to live IN your house.  I tried to get her to promise that she wouldn't kill Bob or scare him off.  "What for?" she says.  "Why you need a hole in the wood? I will be not  strong!" much to practical she is.  She sorta promised.  But i  have a feeling that when i go back to the states next week, Bob's lease will be terminated.  I'll have to work on her some more.

Meanwhile, as i'm working on sanding the porch rails to prep for a little stain, i have too mind that i don't bug Bob.  He gets alarmed when i bang around and get too close.  He'll drop off the rafter and buzz around - oh  sorry, i promised him i  wouldn't use that word - he'll fly around assessing the threat level.  i  stand very still.  My wife tells me that if Bob were to bite me that would be very bad.  my hand would swell  up big as a bell, and become inflamed and burden me with pain.   So i'm careful to appear to provide no threat.

He has some advanced GPS in his brain to find his hole.  He swoops one way, hovers in the air, rotates, swoops another direction, hovers, rotates  and swoops again.  eventually, he locks on to the coordinates, establishes a pattern recognition profile of the exact location of his labors and using an amazing thrust vectoring system, flips inverted and "lands" upside down right at the door to his new home.  Bob proceeds to stick his head into the hole and using jaws that i would NOT like to have clamped on my skin, starts making more wood chips, that fall to the floor beneath him.

I just went outside and checked.  Bob is busy busting out the bits.  He's head and thorax deep into his hole now.  I'm curious as to how deep he's going to go, and what he's going to do when he decides it's deep enough.  crawl in backwards and sip nectarade?  Extrude eggs and make more Bobs?  But wait, if he does that, the my assumption that Bob is male is backwards.  Bob must be female to bust out eggs.  So  why did he/she tell me a masculine name like Bob?  Maybe Bob is a lady-boy? Or a Tom?  I forget which is which.  Maybe Bob  has a Betty out there in the wilds who's busy brooding baby Bobs, and demanded that Bob build a bungalow for her babies, and Bob took the job because Bob is a Best Boy and believes in being the best bee he can for his baby('s)

better bee stopping me now, because i  have been to the behemoth box of "b" words and i can't be bludgeoned into stopping.  it's beedicting.
#END
--
Read my Thailand adventure ::: http://www.thaicountrylife.com
Posted by thaikarl at 20:39