we visit a lot of temples.  they are everywhere in thailand.  even the smallest village will have at least one.  some are more magnificent than others.  on new years day, Tok says "we're going to the beautiful temple in the mountains"  cool!

we took the motorbike, because Tok said there would be a lot of cars on the road, which turned out to be very true.  many cars from bangkok (the origin of the car is named on the license plates.)  of course it was a pleasant day, warm and sunny.  i miss riding the motorbike.  since Tok got her pick-up truck, we take the car more often. the road up the mountain isn't too steep, but our little motorbike burned nearly a tank of gas getting up there - which is a couple of liters.  it hasn't rained since i've been here, so the forests are turning brown, and very dry.  but still beautiful on the drive up.

the temple was extraordinary.  the entire thing was covered in mosaic.  tiles, broken dishes, glass, jewels, ornate plates; and the top was mirror glazed gold tiles.  and they are far from finished.  the upper floors were still cement walls inside.  and they are building another temple near by that will be covered in cut-glass diamonds.  millions of them.  there is a hospital at the bottom of the hill, for people who come to tam bun (make merit) at the temple and need medical care.  in the surrounding hills were resort buildings where you can spend the night.  Tok said they were in Burmese style.

we had visited this site a couple of years ago, when just the concrete shell was under construction.  amazing what they have accomplished since then.  we both wondered how they designed all the elements- was it all planned out as to color, shape and style before hand, or was a rough drawing made and the individual artists allowed to fill the space to in their own design?  however it was done, it took a lot of careful though and devotion to harmony, color and detail to accomplish.  just gathering the materials was a huge job in itself.  someone had to buy the pottery and dishes and tile, and someone had to break things into little pieces to mosaic with.  we recognized bits that were parts from  colonnades, pots, floor tiles, and cups and dishes commonly sold in the markets in thailand. 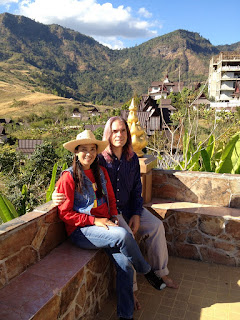 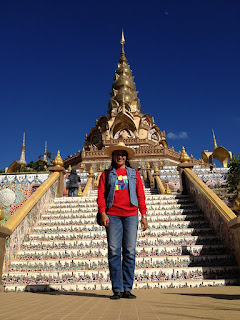 there were many people there due to the holiday.  we'll go back again another day when it's not so crowded and look at the details a little more.  Tok told me there had been some local resistance to building a temple there, but the Kings daughter interceded and requested it be constructed.

when my sister and i went to Europe some years ago, we went to major cathedrals in every town we went to.  there were some very impressive ones, especially the one in Koln Germany.  European cathedrals were of course, built for a different purpose, and in a different time.  i find the Thai temples much more resonant with my own spirit.  the cathedrals just felt like interesting old buildings.  Temples feel like devotion and self directed calm, and the artwork is much more impressive to me.  but i am obviously biased.

There is a gallery of many photos we took that day in picassa.  and there is a panoramic view in my Photosynth gallery.  enjoy.