my mother-in-law has only one kidney, and it's going downhill.  she has to go to the hospital about once a month to have her blood checked, medications adjusted, diet reviewed.  she's doing okay, mostly.  they told her that at some point her kidney function will be so low that she will need dialysis.  it could be done at home for free, but it would mean putting a "port" in her belly to flush fluids in and out.  mama said "phooey on that".
i talked with tok yesterday, and she was urgently running around trying to find blood for mama.  they occasionally give her whole blood - for reasons i'm not quite clear on.  but there are a lot of sick people right at the moment, and the hospital doesn't have any in stock.  so tok was going all over the place trying to find a relative, friend or volunteer to give a pint of blood for mama.  she said she went to 3 hospitals, and all the near relatives with no luck.  next she was going to the police station, then the army base, then to the jail.  could you imagine that? running yourself around trying to find someone with type "O" blood for your mother?  tok has a thyroid problem, she can't donate.  her daughter doesn't have enough hemoglobin sho she can't either.  when i talked to her today, she said she found the policeman who had the right blood, so they were sending it to the hospital in Pitsanolok to be tested for compatibility. so it looks like things are okay for now.
of course i asked all the "problem solving " questions: "can't you order some blood from a big city like bangkok?", "can they put some donated blood in the fridge to keep untill next time mama needs some" apparently, that's just not the way it works. so i made a few jokes, "is she being a vampire today" and if the hospital in Pitsanalok says the policeman's blood is "Aloi" (tastes good) then they can use it this time.
being so far away, the only thing i can do is be supportive, and try to understand. 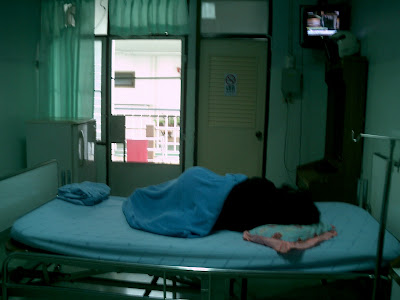 mama hanging out in the hospital last month
big sigh...
Onward!
Posted by thaikarl at 20:28